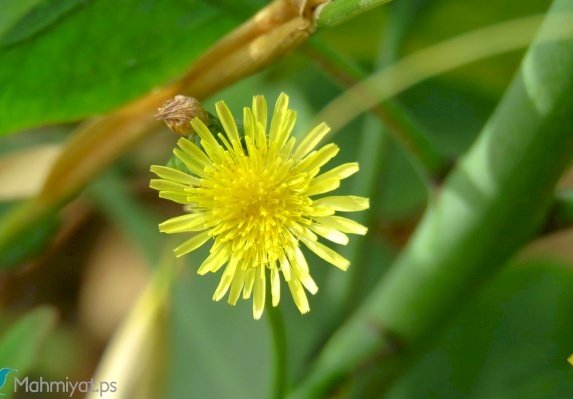 Common sow thistle is annual growing to 1 m and belongs to the Asteraceae family in the Asterales order . It is native to Europe and Western Asia. Leaves are alternate, dissected once, dentate or serrate. The stems are a 5 angled hollow stem that is dark green (sometimes tinted with a reddish-purple tinge). The mature plant is 30-110cm in height and arises from a deep taproot. The flower heads are yellow and are 5-6mm in diameter and are borne on stalks at the ends of branches, in an irregular terminal panicle (a compound inflorescence with a main axis and lateral branches which are further branched, and in which each axis ends in a flower or bud), with or without hairs. The flowers tend to open primarily between the hours of 6am till 11am, they are hermaphrodite only, common pollinators include bees and flies. It spreads by seeds being carried by wind or water and flowering all year around. The fruit is an achene (a dry indehiscent, non-opening, 1-seeded fruit) that is 2.5-4mm long and 1mm wide, brown, 3-ribbed on each face, wrinkled with narrow margins and compressed and obovoid in shape. The seeds are light with white parachutes of silky hairs (pappus), the silky hairs being 5-8mm long.

Ecology: This plant is considered an invasive species in many parts of the world, where it is found mostly in disturbed areas, it grows in Waysides, waste and cultivated ground. A common weed, avoiding acid soils and shady positions. spiny is absent, non-succulent, glycophyte, mostly, and follows the Euro-Siberian - Med – Irano-Turanian Chorotype.

Medicinal and other uses: Leaves are eaten as salad greens or cooked like spinach. This plant  has a variety of uses in herbalism. It also has been ascribed medicinal qualities similar to dandelion and succory, the plant is emmenagogue and hepatic. An infusion has been used to bring on a tardy menstruation and to treat diarrhoea. The latex in the sap is used in the treatment of warts. It is also said to have anticancer activity. The stem juice is a powerful hydrogogue.

Cool facts: Though it is annual herb but it can be seen flowering over all the year and almost in every habitat , it is known for popular people and distinguished with its milky liquid inside it.