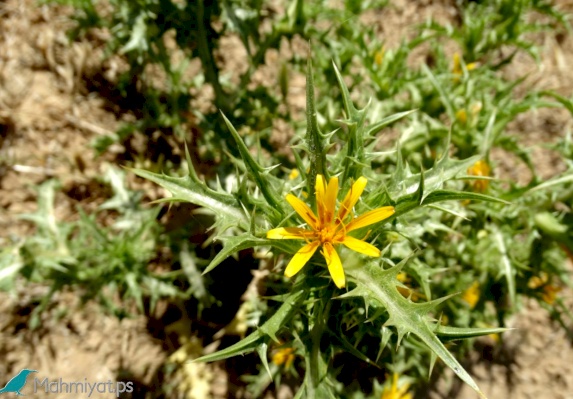 Golden Thistle is Hemicryptophyte perennial growing to 1 m, belongs to the Asteraceae family in the Asterales order. It is native to southern and western Europe, north to northwestern France, contain milky sap. Stem leaves are rigid and deeply divided, with rigid spines. Leaf bases extend down the stem as spiny wings with upper leaves reflexed. Rosette leaves grow to 30 cm long and are less rigid and less spiny than adult plants. Leaves are ovate to oblong, alternate, rosette, spinescent, dissected once, dentate or serrate. Stems are erect, sometimes single but usually several stems are produced from a crown. Stems have many branches, are spiny winged and covered with fine down, containing milky sap. Golden thistle has golden-yellow florets on solitary flower heads of 2.5-4 cm in diameter. They develop on very short stalks in the leaf axils with each head surrounded by a few very stout, spiny bracts. The flowers are hermaphrodite (have both male and female organs) and are pollinated by Insects, and flowering period from May to August. Fruits are Achenes 2-3 mm with a pappus that has a short corona. Golden thistle seed is yellow-brown, flat with a membranous margin or wing.

Ecology: Golden thistle prefers warm-temperate regions where it occurs on dry sites and soils ranging from poor gravels to fertile alluvial loams, the weed is drought tolerant. It is glycophyte in terms of salt resistance, mostly natural, also synanthropic, non -succulence, Spinescence in both bracts and leaves. This plant follows the Mediterranean chorotype. Wind plays an important role in the dispersal of golden thistle, even though the seed is not equipped with a pappus of hairs. The aerial growth of the plant breaks off at ground level and tumbles large distances before being caught against fences, trees or logs, raised or rocky outcrops, Seeds can also be caught in wool and other agricultural produce. Some spread is possible by cultivation equipment dragging pieces of cut root to clean areas.

Medicinal use: Since at least the time of ancient Greece, this plant has been known for medicinal and culinary uses. It's usually cooked in porridges, salads, soups of with scrambled eggs in some countries like Spain. It is Used for treating stomachache, diuretic and ulcer.