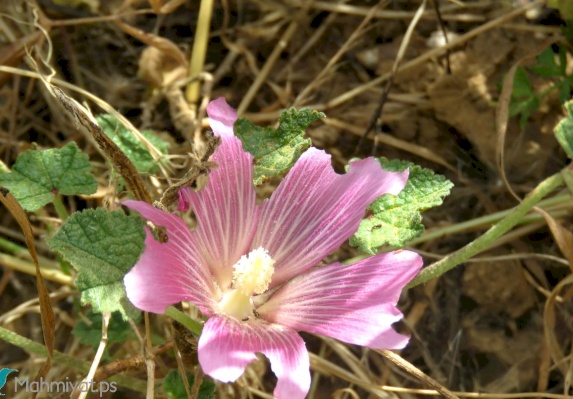 Cornish mallow is an erect annual or biennial herb growing to 1-3m in height and belongs to the Malvaceae family in the Malvales order. The leaves are borne alternately (one per node), subtended by two stipules. They are simple, sub-orbicular, palmately veined, shallowly and bluntly 5-7 lobed, and toothed, with a cordate base. The leaves are multilobed with flat or wavy edges, slightly hairy, upper leaves more distinctly lobed, dentate, tomentose on upper and lower surfaces. The stems are upright, green, and sparsely covered in short, impersistent, hairs. With age they develop a reddish tinge, before turning to a light brown. Flower petals are pale lilac fading to near white in the eye, with darker veining. They are about 15-20mm long, and deeply bilobed. Flowers are Hermaphrodite are partly self-pollinating, and visited by small bees and flies. Flowering periods from February to April. Fruit disk-like, composed of 7 to 12 segments that break apart at maturity, each segment 3-4 mm long, the dorsal surface smooth to reticulate, the lateral surfaces somewhat reticulate.

Ecology: It is found in coastal area of the near east and Mediterranean region where It is A native of western and Mediterranean Europe. It has been reported to occur on disturbed sites, dunes, roadsides, and fallow fields. It has no spiny parts, non-succulent, glycophyte, mostly natural, also synanthropic, and follows the Mediterranean chototype, It is predated by a number of insects including weevils and aphids. Cornish mallow is not considered a noxious weed in agricultural or horticultural practice, at least at a global level. Leaves are edible and may be cooked and it is popular food in the Palestinian heritage.