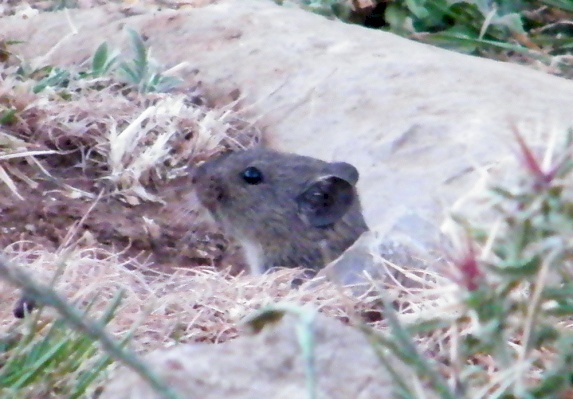 Description – A medium-sized rodent which is adapted for living in burrows underground. It has dense grey brown fur on the back and lighter grey fur on the belly. The eyes are small, and the ears, legs, and tail are very short. They have 16 teeth, which grow constantly through its life in order to deal with the tough plant material it eats.

Distribution in the country and worldwide – They are distributed across North America, Europe, and Asia, including all of Palestine.

Habitat – Lives in open areas, fields and human settlements, where it can find dense undrained soil in which it can dig burrows. It is an inhabitant of dry grassland, shrubland, and semi-desert areas. It can be found up to 2000m above sea level.

Behavior – Lives in complex colonies composed of a dominant mature male, a few females, and younger subordinate males. Each colony builds a shallow and complex burrow system with a depth of up to 60cm, with about 10 entrances. In their burrows they have chambers for seed storage and also areas for giving birth and nursing young. The group do not move more than 10m from their burrow and above-ground activity is limited, especially in summer. They are vegetarian and eat mostly seeds, roots, tubers, and legumes.

Breeding/mating (season, how and where) – Reproduction occurs year round. The dominant male mates with all the females in the group. Pregnancy lasts three weeks and then the females produce a litter of 6-8 young. They can produce up to five litters per year. Under favorable breeding conditions, they can produce 10 litters with up to 14 pups each. The pups are born hairless and blind, and totally dependent on their mother. The pups open their eyes after about a week and the hair begins to grow. After three weeks they are weaned, and after two months they are independent and reach sexual maturity. A female can produce 60 pups a year and almost double that number under favorable conditions. Many of the pups die from diseases and hunger, or fall prey to snakes. Typically females remain with the colony for life, but males will leave to join a new colony once reaching maturity. They can live up to 2.5 years in the wild and up to 4 years in captivity.

Threats and hazards – Considered as one of the main pests in agricultural landscapes, as a result farmers often deeply plow their fields to destroy burrows or spread poisoned seeds. Once in every 3-10 years they have a year of increased reproductive rates causing a population explosion. This leads to mass starvation, but also leads to an increase in the predators’ populations.

Cool facts – Occasionally a female can mate and become pregnant before she has been weaned from her mother.