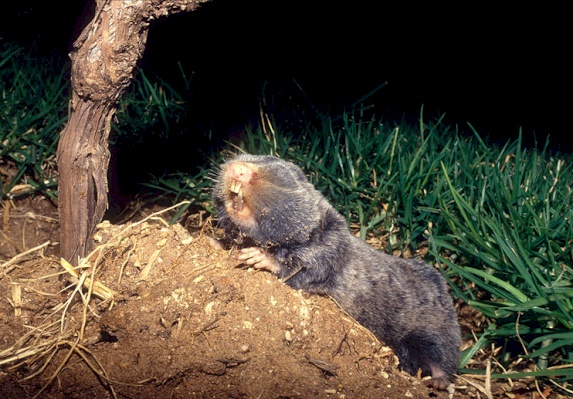 Description – A medium-sized rodent with a cylindrical body. The fur is soft and velvety, and gray-brown in color. They spend their entire lives underground, and are well adapted - Ears are missing and the eyes are covered with skin and hair; The head is flattened and wide and connected to the body by strong muscles for digging and pushing dirt out of the way. At the edge of the soft and flat nose there is a hard horny cover and whiskers help them orient. They have short legs with 5 toes, which are equipped with sharp claws and long, constantly growing incisors, that are good for digging.

Distribution in the country and worldwide – Distributed from Russia and South Europe to Libya and Egypt. It is widespread in the eastern Mediterranean coastal areas. Common in Palestine in Mediterranean habitats with soft soil.

Habitat – A subterranean species that inhabits burrows in steppes, dry steppes, semi-desert and marginally at the edges of deserts. It is often found close to its preferred food source, the plant Asphodelus microcarpus, and in cultivated lands such as barley fields.

Behavior – Strictly herbivorous, they feed on plant parts growing under the ground (tubers, bulbs, roots and rhizomes), which are found by digging tunnels in their burrows. They store food and keep each kind of food in separate chamber of the burrow. They have also chambers for sleeping, nesting and defecating. They are solitary and territorial. The complex, branched burrow system of one individual can encompasses an area of 250-500 square meters. Burrow systems are often found in close proximity and may even be interconnected. In winter the depth of the burrow is 10-40 cm and in the summer 1m, to find refuge in cooler soils. They can be active any time of day. Typically after a few hours of activity, it rests a few hours and then returns to be active.

Breeding/mating (season, how and where) – Males and females only meet for the purpose of mating between November and January (the rainy season). The male enters the female's burrow and makes mating sounds. The female chooses the male and they mate 50-60 times, after which the male returns to his burrow. During this period, females build nesting chambers padded with vegetation. On average, the female produces one litter every year, containing 3-4 young. The pups are born blind, naked and helpless. After two weeks, their body is covered with hair and they can start eating plant material. At the age of one month they are weaned, and two weeks later, leave the nest, rise to the surface and wander off until they dig their own burrow. They then reach to sexual maturity at the age of 20 months.

Threats and hazards – Plowing is known to disturb their burrows. Due to both their choice of food and the quantity they eat, they can become a pest and get poisoned. Encounters between members of the same sex or during the non-breeding season frequently result in injury or death. Many of the young are eaten by birds of prey and mammalian predators.

Cool facts – They navigate their way through the underground tunnels using the earth’s magnetic field.