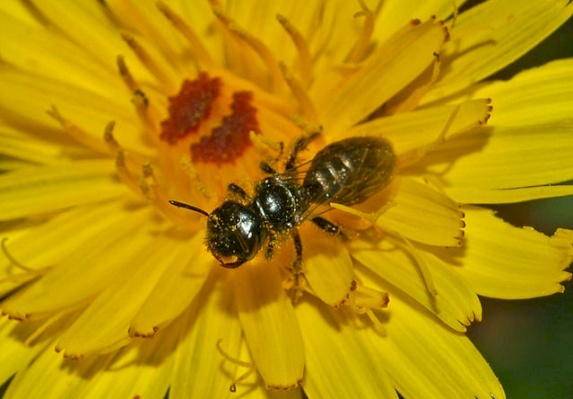 There are 35 species of Panurgus distributed exclusively in the Palearctic region, from which six species are found in Palestine and wider area. Like Camptopoeum bees, Panurgus spp. are also called mining bees, because they dig the ground for constructing their nest.

The species of Panurgus have small to medium body size, ranging from 5 to 14 mm and are almost entirely shining deep black. They also have just few hairs on their body, except by their hind legs, which have scopa (long hairs for collecting and carrying pollen). Their scopa is formed by voluminous yellow/orange long and wavy hair brushes, hence their English name “shaggy bees”. Males (drones) have evident thick and long black facial hairs and, for some species, the males have characteristic big, square heads. Their antennas are short and clavate (thick on the extremity and thinner on the basis).

Panurgus spp. construct their nest in small to big agglomerations into the soil, such as Andrena spp., on flat, sloping and mostly sandy ground with little or no vegetation. In this case, each female has their own entrance, few centimetres under the surface, which lead to a communal access to the brood cell chambers. The strictly solitary species Panurgus banksianus digs a vertical, 5-20 cm deep entrance with perpendicular branches leading to several side passages that open into single horizontal brood cells. Interestingly, Panurgus banksianus builds two nest entrances, but only one of them leading to the brood cells. The advantage of this nest architecture is misleading a probable brood parasite species from reaching the brood cells and killing the host.

All species of Panurgus are ologolectic on Asteraceae as pollen source. Females collect and carry pollen on their scopa, to the nest. The plants that Panurgus species visit are blooming in morning time, thus, these bees are mostly flying in the morning. Panurgus spp. larvae overwinter without spinning a cocoon. In addition, they have one generation per year, flying from June to September and adults can be found mainly in late summer. The main parasites of Panurgus brood cells are bees that look similar to wasps, from the genus Nomada. Some males may fly around the nest looking for females, or waiting on the flowers, where they may also sleep.

List of species of the genus Panurgus distributed in Palestine and wider area.