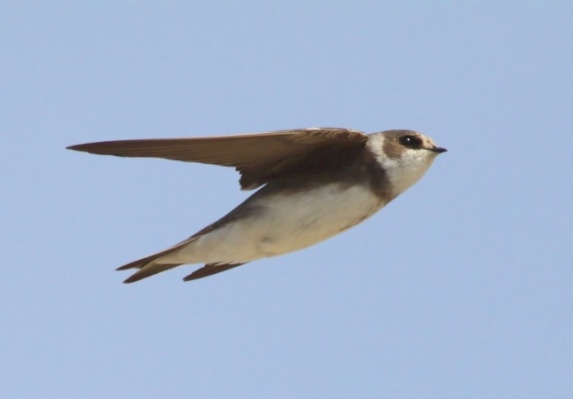 The Sand Martin, also known as the bank swallow, belongs to the Hirundinidae (Swallows and Martins) family in the Passeriformes order.

The Sand Martin is a small and slender swallow that nests in holes in the ground in river banks. Its upper parts are greyish-brown with prominent brown chest stripe. The throat, lower breast, belly, and vent are off-white. The underwing is all dark. One of the smallest swallows, with a short dark, shallowly forked tail. The call is a short and dry rattle, "Frrrrt".

Distribution: This species broad distribution range extends from Europe, most of Asia and North America in summer. They migrate south for the winter to Africa, Southeast Asia and South America. In Palestine it's a very common migrant in both spring and autumn. It possibly bred in the past in the Jordan valley.

Habitat: The Sand Martin breeds along walls of sand, usually near rivers or streams, as they mainly hunt low over the water's surface for aerial insects. On migration and in winter they can be found in fields, wetlands and any other habitat with abundancy of flying insects.

Breeding: The Sand Martin is a highly social species, nesting in colonies that may number up to 2,000 pairs. They nest in burrows in fairly soft soils that are easy to burrow into, and near wetlands that supply flying space. The burrows are mostly built in the upper part of the bank, to avoid predation. The male Martin digs the nest using the beak, feet and wings. The burrow is sometimes 1 meter long. 2 to 7 white eggs are laid and incubated by the female, for 12 to 16 days.

Dangers and threats: Suitable sand martin breeding sites are quite rare and local and can be subject to fast changes created by man or nature. Water drainage systems, developed by man to avoid floods of infrastructure, usually destroys most of the breeding sites for the Martins.

Similar species not to confuse with: The Barn Swallow is larger, with a glossy black – blue back and a reddish chin. The House Martin has a white rump and glossier upper parts.

Cool facts: The adult sand Martins can recognize their own chicks by their individual calls even in a large flock.