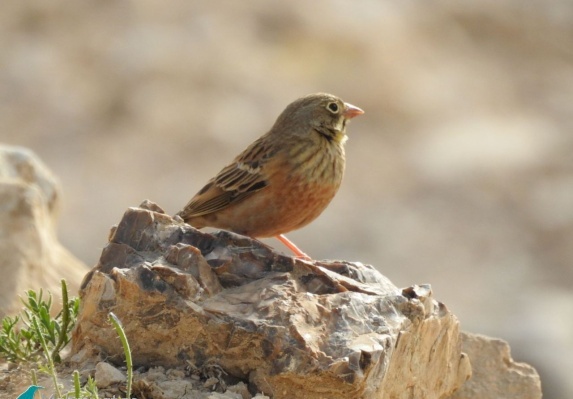 The Ortolan Bunting belongs to the Emberizidae (Buntings, American sparrows and allies) family in the Passeriformes order.

The Ortolan Bunting is a very attractive seed eater. The male is distinctive and striking with gray – olive green head with bright yellow patch on the chin, on its mallar stripe and across its face. The underparts are orange-brown. Wing and back are streaked and the tail is brown with white outer feathers visible in flight. It has long, buff-pink legs and a pink small bill. Female and immatures are less colorful with duller throat and have light brown spotting on the breast and belly.

Distribution The Ortolan Bunting is a summer visitor to Europe and central Asia, as far west as Mongolia. Winters in sub-Saharan Africa, mainly in East Africa (but occurs in Nigeria to the west). In Palestine: quite a common migrant in autumn and spring in open areas and fields. Can be seen in thousands in fields around Jericho in mid-April.

Habitat: Nest on the ground among bushy, agricultural, and even mountainous areas. In Europe, prefer more open areas with sparse vegetation. In the Middle East and Asia more commonly in rocky areas up to 2,000 meters. On migration can be seen mainly in cultivated areas but also in the desert around bushes and trees.

Behavior: The Ortolan Bunting is a seed eater that spends most of its time foraging on the ground. When it is in rest, it sits on outer branches of trees and bushes.

Breeding: The nest is built on the ground, hidden in the shrubbery. Incubation of the eggs is carried out mainly by the female while the male helps with cleaning and protecting the nest . Hatching of the eggs should coincide with an increase in insect abundance, upon which the chicks are fed.

Dangers and threats: the main threat to The Ortolan Bunting is habitat loss to development and urbanization that limits its nesting habitats and food source. Hunting is a major threat too, mainly in France where its meat is considered a delicacy.

Cool facts: The Ortolan Bunting is a popular French delicacy associated with a peculiar custom. Once captured, the Bunting is kept in a dark room and force-fed oats before being drowned in Armagnac, roasted, and eaten whole while the diner wears a napkin over their head. Despite the fact that hunting of the Bunting was banned in Europe since 1998, hunting still goes on in France, with up to 50,000 poached each year, primarily in Landes, in south-west France