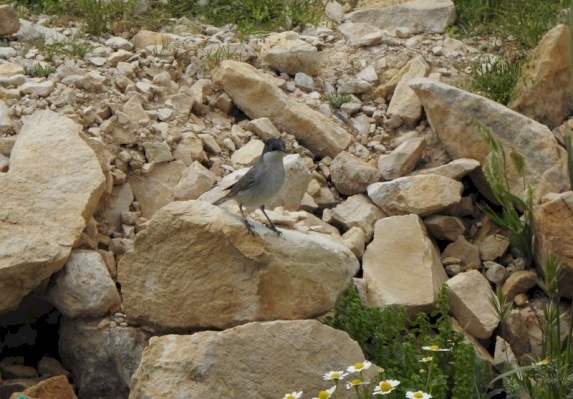 The Eastern Orphean Warbler belongs to the Sylviidae (Old World warblers) family in the Passeriformes order.

The Eastern Orphean Warbler is one of the larger Sylvia warblers that occur in our area. It is similar in coloration to the Lesser Whitethroat but larger and heavier. The head of the adult male is very dark grey or almost black, and gray on female. Upper parts are gray to grayish-brown. Light iris in male. Large black tail with white outer feathers. Throat and underparts are buff – white and the under tail coverts are marked with gray spectacles.

Body length: 15 to 16.5 cm. Weight: 15 – 25 gr. Distribution The Eastern Orphean Warbler breeds in southeastern Europe, the Middle East and as far east as Afghanistan. In winter they migrate to East Africa.

In Palestine: Fairly common migrant across the country. It is a rare breeder in natural densely vegetated habitats of northern Palestine.

Habitat: The Eastern Orphean Warbler occurs and breeds in areas with at least some trees, such as oak, buckthorn, orchards, and olive groves. Not found in places with only bushes. On migration it can be seen in almost every habitat, even in the desert.

Behavior: The Eastern Orphean Warbler is a shy bird, hidden most of the time in the interior of trees and bushes. It sings its very melodious song from an exposed branch in the tree. Breeding 4–6 eggs are laid in a cone shaped nest in a tree. Both parents feed the young in the nest and following the fledging time.

Dangers and threats: Habitat destruction and changes in land use from natural vegetated areas to farm land is a major threat to this species.

Similar species not to confuse with The Lesser Whitethroat is similar but smaller and with a slenderer bill. The very similar Western Orphean Warbler does not occur in our area and has a white under tail coverts and a different song.

Cool facts The Eastern Orphean Warbler got his name from Orpheus, The legendary ancient Greek musician, due to its fluty beautiful song.