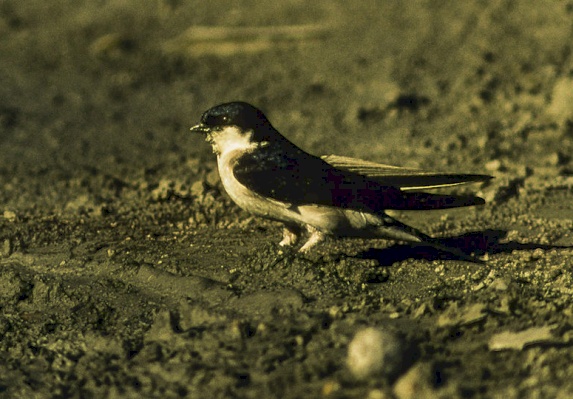 Description: The house martin is a very well-known small, black and white bird that creates a mud cup under the eaves of houses.

Distribution: in the country and worldwide, Very like the swallow, it has a broad distribution. Europe, North Africa, the Middle East and Asia is home to the House Martin. The whole population migrates south to winter in Africa and Southeast Asia. It is a common bird that migrates through and might be breeding in Palestine (if it will be found it will probably be around Qalqilia and Tul Karm or wadi al-qelt).

Identification (how does it look like): A sparrow sized bird that is glossy blue-black on top apart from a large bright rump. Underside and throat is pure white. The dry rattle ‘prrrit’ is a common sign that the house martin is present. in flight it glides regularly on long wings with short rapid bursts of wing beats to catch an insect.

Behaviour: During the breeding season can often be found collecting mud parcels in its beak from muddy muddles or sides of streams to build its nest. Observations are usually when it is seen flying around the roof tops in towns and villages or over the surface of water bodies. Can be seen in their hundreds on migration.

Breeding/mating (season, how and where): Is often attracted to nest under the eaves of houses but will use cliff faces where several hundred birds have been recorded.

Threats and hazards: Use of pesticides on migration routes and on breeding grounds have impacted the house martin population due to prey numbers reducing and the effect of secondary poisoning.

Similar species not to be confuse with: Swallow is white underneath but has red throat and long tail streamers. Sand Martin has brown plumage on top with no white rump and a brown breast band.

Cool facts: House Martins can have multiple broods and it has been recorded that the young from previous broods will help feed the chicks in a current brood. A very unusual occurrence in birds. They are also known to eat thousands of mosquitos per day, what makes them very important pest control agents.