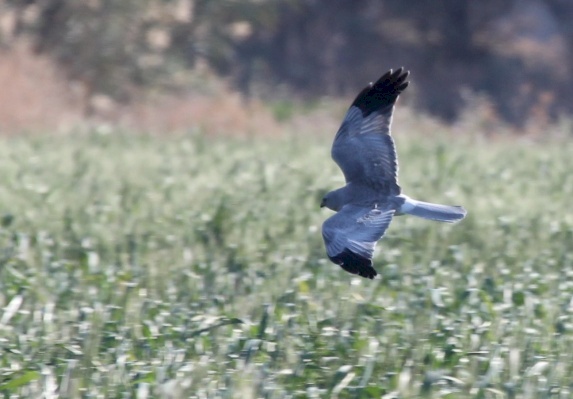 Description: A beautiful bird that can be seen gracefully quartering fields and marshland on wings held upwards in a V-shape.

Distribution in the country and worldwide The most widely spread of the harriers occurring within the region. Can be found in Europe and western Asia. Harriers in Palestine over-winter entering the area in October and staying until March when they go to their breeding grounds. They prefer open habitats in low hills and fields. Most of the population wintering in Palestine is of females.

Habitat: Harriers can be found breeding amongst a variety of habitat. They prefer to breed in bogs on open taiga, marshes or shallow lakes with much vegetation. Moors and heathland are a favourite as well. During the winter they like open country such as agriculture and marshland.

Identification (how does it look like): The male and larger female are sexual dimorphic. The adult male is a stunning bird with its silvery grey body, white rump and black wing tips. The underside of the body, tail and underwing are white. Females and juveniles are brown upper parts with a white rump. The underside is streaked brown with a buffy-white underwing.

Breeding/mating (season, how and where): The hen harrier does not breed in Palestine. Where they do breed they prefer to build a simple nest on the ground or on small mounds of earth. The female lays 5-7 eggs while typically 3-4 chicks survive.

Threats and hazards: The decline of the hen harrier is caused by a number of factors. Destruction of habitat is the main one, although hunting in certain countries cause a major impact. Harriers have a wide circulation throughout Europe and in Western Europe are in the middle of a long standing environmental conflict. Britain for one is at the forefront of this conflict with harriers being shot and poisoned by gamekeepers owning grouse moorland. There was once thousands of pairs of harriers breeding here but this population has been decimated. There is a large struggle going on between nature conservation organizations and game keepers in various places in England. As they quarter areas quite slowly hen harrier are susceptible to fatalities with the blades of wind turbines.

Similar species not to be confuse with: Montagu’s Harrier have four primaries instead of five. The adult male has a black band that is visible on both the upper side and under side of the wing. Females are distinctly barred on the underwing coverts. Pallid Harrier have four primaries instead of five. Adult males are a very pale grey compared to the hen harrier. Females have dark secondary coverts.

Cool facts: Did you know that the male harrier is one of the few birds of prey that lives a life of polygamy, where one male breeds with several females?