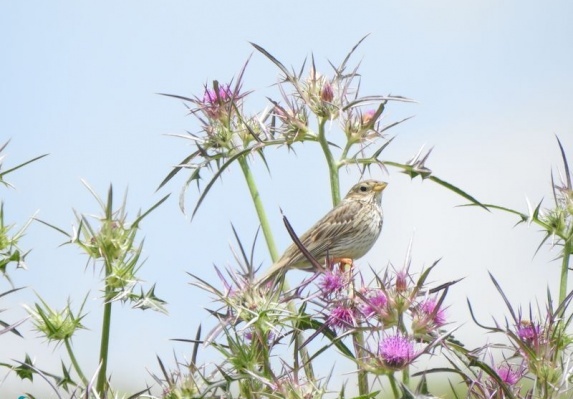 The Corn Bunting belongs to the Buntings family (Emberizidae) in the Passeriformes order.

The Corn Bunting is a common songbird of fields and open landscapes. The Corn bunting has a Lark like plumage with dark grey-brown upperparts with buffy-white underparts. They are streaked on throat, breast, and belly and have an obvious mallar stripe. Body and bill are both heavy. Unlike other buntings, they have no white in the tail. Legs and bill are yellowish-pink. Male and female have similar plumages.

Distribution: The Corn Bunting is found in North Africa, parts of Southern Europe, have small populations is specific areas of Northern and Eastern Europe and Asia. It is sedentary in most of its range but many also migrate to the Middle East and the Arab gulf area. It's an invasive species in New Zealand and Australia.

In Palestine: a very common winterer in open natural habitats and fields in flocks. Scarce breeder in open areas of the West Bank.

Behavior: Likes to sing from an elevated post, including trees, bushes, wires, or fence posts. Can also be found on dry mountain slopes. Song is a distinctive metallic ring, “tuck tuck zick zik zkzkzrrississss”, call and a metallic “tsritt”. The Corn Bunting is a social bird used to flocking and nests in small colonies.

Breeding: In Europe, breeds in farmland with cultivated crops. Sometimes in small colonies. The nest is bowl shaped, made of twigs and located inside trees are bushes.

Dangers and threats: Change of land use and agricultural methods. It is being hunted by lime sticks in southern Europe.

Similar species not to confuse with: The female Spanish Sparrow resembles it but has much less prominent streaks on its chest and back and the bill shape is straighter.

Cool facts: In the breeding season, the male can “marry" five or more different females and mate with each of them separately. Not only that, he does not assist with building the nest and does not help rear offspring. This is called polygamy or in other words multi-spouses.