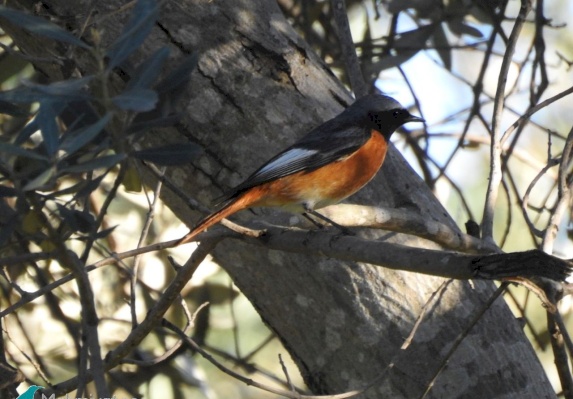 Systematic: The Common Redstart belongs to the Muscicapidae family in the Passeriformes order .

Distribution in Palestine: A common passage migrate. The eastern subspecies Samamisicus arrives earlier in autumn migration (beginning in August) and spring (beginning in early March). European subspecies phoenicurus passing at autumn till mid-November, and during the spring until mid-May.

Habitat: The Common Redstart likes orchards, hedges, woods, gardens and parks. It uses as an observation post the lower part of a tree or bush, and it attacks its prey- beetles, butterflies and other insects and tasty spiders. After catching them, The Redstart returns to its hiding place and vibrates its red tail – a typical redstart behaviour and important identification sign.

Identification: A sexual dimorphism is obvious: the males' throat and face are black (young may have some white mixed), with chest and ventral are bright orange. The belly is whitish. The upper parts are greyish-blue. Female are completely brown, brighter at the lower parts, and sometimes lightly speckled on the sides of the body and the chest.

Breeding: They nest in natural tree holes, so they benefit from dead trees. Sometimes they use nestboxes. A cover of moss is preferable. It doesn't breed in Palestine.

Similar species not to confuse with: Among common Local birds, only the Black Redstart has a similarly coloured tail; though the Black males' orange belly never reaches the head, and the females of the latter are darker in colouration.

Cool facts: It derives its name from the male's red tail; start being an old English word for tail.