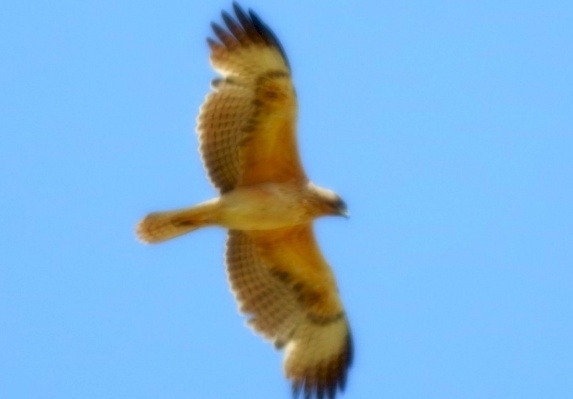 Systematic (order, family): Accipitriformes, Accipitridae Description: The booted eagle is one of the smallest eagle in the region, being of a similar size to Steppe Buzzard but having 6 primaries making the ‘hand’ of the wing slightly wider. Distribution in the country and worldwide It Breeds in north-western Africa, Spain, France, Turkey, southeast Europe and further east to Central Asia and Lake Baikal. In that area the population is scattered. The western palearctic population winters in Africa, south of the sahara, and migrates through Gibraltar, Bosphorus and the Middle East (the numbers in Gibraltar are higher with a record of 50,000 Booted Eagle in the autumn migration of 1972). In Palestine it is a fairly common passage migrant in both seasons. It can be sometimes found in the winter, occurring usually in Lowland areas and around concentrations of Pegions. Conservation status: Least Concern Habitat: The booted eagle required a mixture of open ground around hills or mountains where it can find prey. This species utilizes forests where it nests in trees. Identification (how does it look like): There are three main colour variations in Booted Eagle. 50% of the population occur as pale morph, the other 50% is made up of the two darker variants. The pale version has a white underbody and underwing coverts. This contrasts against black primaries and secondaries. The darker morphs replaces the white with a darker brown underbody and underwing coverts. Behaviour: Around 10 Booted Eagle will spend the winter in Palestine (Shirihai, 1996). The peak migration in the autumn is around the 10th-20th September. The maximum number of birds recorded on autumn migration was about 2000..The Eagles main prey is large birds which they catch with their very long toes and talons. Spring migration occurs through the beginning of March until the end of May, with the peak in late March to early April. This migration is spread across a broad front, passing mainly through the west bank and then pushing north through the east of the country. The largest number recorded was 600 birds viewed from the Bir Elseba survey in spring 1985. 260 birds passed in the spring migration in 1982. Weight and size: Body length- 42-49cm. Wingspan: 113-134cm. Weight: 500-650g Threats and hazards: Most of the threats the Booted Eagle faces is the same for most birds of prey. Destruction of habitat is the main threat but secondary poisoning is of concern too. Turning blades from wind turbines and electrocution from overhead power lines is also a common occurrence. Similar species not to be confuse with: Black kite Egyptian Vulture