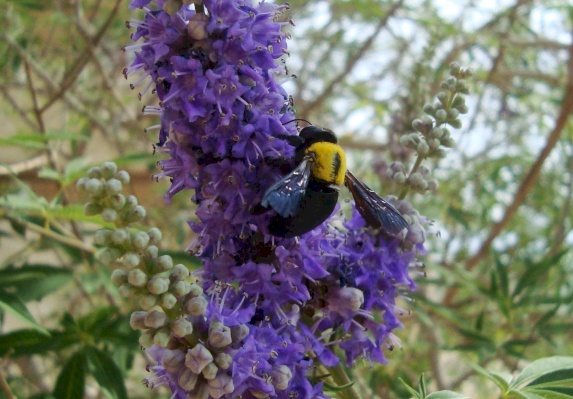 This carpenter bee, scientifically known as Xylocopa pubescens is the most common species, among several carpenter bee species composing the Palestine bee fauna. The females typically dig holes in dead wood, with their strong mandibles, for constructing their nests, hence the name carpenter bees. This species is originally from Ethiopia and is largely distributed in Palestine, as well as in the Mediterranean basin, Southeast Asia and Northeast and West Africa.

This is a large body bee species with females that are shining black and have a thorax totally covered by yellow short hairs. They have a sting that can hurt, despite they are surely not aggressive to humans. The males are smaller in size, characterized by a narrow head and yellow/golden short hairs that cover their entire bodies. In contrast to females, males do not have a sting, like all male bees, wasps and ants.

Xylocopa pubescens forages in several plants (polylectic), visiting more than 60 plant species in Palestine and the wider area altogether, for collecting pollen and nectar as feeding resources for their offspring and for drinking nectar as energy resource the adult bee need. Furthermore, these bees need a minimum environmental temperature of 18°C for foraging, due to the energy required for their large bodies.

Interestingly, X. pubescens is a non-social bee species (there is no queen in the nest and no big colony), however it can present semi-social behaviour depending on the environmental conditions. This plasticity, where both solitary and social nests can coexist in a same population, is unique for X. pubescens, among all the species of the genus Xylocopa worldwide. This level of social organization does not form big colonies, like the colonies of honey bees. Instead, the individuals of a nest of X. pubescens may facultative cooperate with the nest care and reproduction. There is only one dominant female who lays eggs, a little like a queen of the real social colonies, but instead supressing the workers reproduction by using strong pheromones, the dominant female of X. pubescens supresses all the other bees from laying eggs by avoiding them from reaching the brood cells.

Each nest is founded by a single female, between March and November. It digs holes in dead wood, forming short tunnels that end up in chambers, where the food resources and eggs will be placed. With the increase of the offspring, the nest increases and the daughters of the dominant female or foreign intruders will help with nest maintenance, such as foraging and nest guard. The daughters can continue digging their own tunnels as an extension of the mother tunnel, but they all share the same chamber that leads to the exit of the nest. One daughter or one intruder can take the dominant female over by force and become the reproductive dominant female. The deposed bee will then occupy a guardian position or will leave the nest and try to found another nest. Later on, the deposed bee can try to conquer the reproductive dominance of the same nest again.

A further curious aspect of this bee species is their visual and olfactory capacities to recognize their own nests after a foraging trip, which is vital for a proper nest provision. This characteristic is especially important because nests of X. pubescens are often found in aggregations, highlighting the need of the females to find their specific nest. Furthermore, the females are able to avoid visiting the same flower once again, by marking the flowers with pheromones. Likewise, they refrain foraging on flowers, which were already visited by another individual of X. pubescens, thus preventing unnecessary energy consumption.

As part of the normal ecological interactions in nature, X. pubescens has also to deal with predators and parasites. Ants (especially Monomorium gracillimum), termites and birds (e.g. the woodpecker Dendrocopos syriacus) are the main predators threatening the nest of this bee, by feeding on their brood cells or on the adults. Moreover, the parasites Coelopencyrtus spp. can lay their eggs into the larvae of the bee. Several larvae of this parasite will then hatch from a single bee cell and will feed on the bee larvae, killing the host.