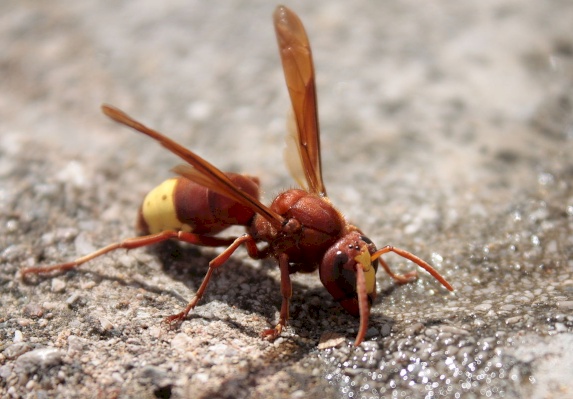 This large wasp species, also known by its scientific name Vespa orientalis, is commonly distributed at the Palestine region. It is a social wasp, living in a nest, which is built up as a colony and controlled by a queen. This is the only species of the genus Vespa that manages to live in the desert climate like the Middle-East, Northern Africa and some regions of Southwestern Asia.

The body of the adult oriental hornet is between 25 to 35 mm long. The queen is the biggest and the workers and the males are smaller. They are all brown reddish coloured with a thick yellow strip on the abdomen and a yellow spot on the head. All the females, queen and workers, have a sting that can be very painful to humans.

One peculiar characteristic of this wasp is that they use sunlight for harvesting energy. Their exoskeleton (the external layer of the body) with a yellow strip on the abdomen and on the forehead has a special pigment (xanthopterin) that can harvest amounts of sun radiation, producing energy, which is probably used for digging the ground with their mandibles, as they and construct their nest under the surface. This is possibly the reason that this species is most active in the middle of the day, when there is highest solar incidence, because their digging activity is positively correlated with the intensity of sunlight. Many other wasp species, on the contrary, are more active in the morning.

Oriental hornets form a new colony every year under the command of a single queen. In autumn the queen lays eggs that will develop to new queens and males (drones). When they hatch, the new queens will mate and the males will die directly after the mating. The new fertilized queens search for a safe place to hibernate in the coming winter. When the spring comes, each of the fertilized queens will establish their own colony, by laying several eggs. From these eggs will hatch workers, who will take care of the colony´s work. The colony will grow throughout the spring and summer to the size of thousands of individuals and can contain up to 900 brood cells.

Like most of wasp species (except Masarinae, the pollen wasps) the adult oriental hornet feeds on nectar, honeydew, fruit liquids and, for feeding their offspring, they hunt animals like honeybees, flies and grasshoppers for bringing to their nest. Thus, oriental hornets really appreciate to fly to honeybee hives and try to capture some bees and honey! However, these wasps also bring to their nests animal protein liquids and pieces collected from carrion as part of the feeding resources.

Besides the pheromonal signs, oriental hornets interestingly use rhythms, vibration in acoustical communication, with mainly three different vibration signs. One is the larvae signalizing when they are hungry; another is the “taps to the queen”, in which workers produce sound by tapping their abdomens while facing the queen, possibly meaning to encourage the queen to lay more eggs. There is still the “'awakening taps of workers”, another kind of sound vibration, which is similar to “taps to the queen”, but in a different rhythm, meaning that an intensification of the activities in the colony is needed.

One last but not least interesting point is that in 1992 the Space Shuttle Endeavor (NASA) launched an experiment called “The Hornet Experiment”, based on the oriental hornet, which has a unique ability to construct its combs in the direction of the gravity. The aim of the experiment was to discover how to prevent astronauts from suffering headaches, vomiting, nausea and weakness during missions, by investigated the effects of microgravity on the hornets. These symptoms are thought to be caused by disorientation due to lack of gravity perception. However, after the launch, due to a problem in the water system, which caused an abnormal increase in humidity, 202 hornets (out of 230) and 103 pupae (out of 120) died and the experiment did not really work out.