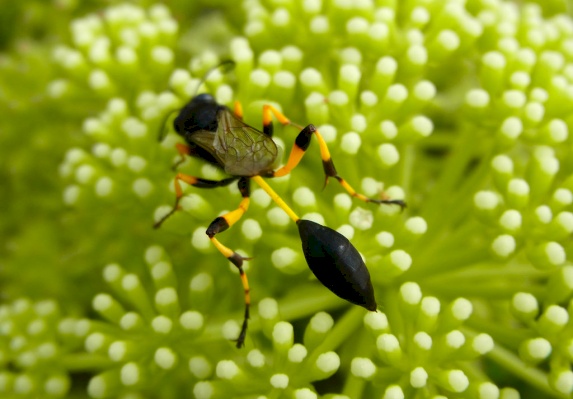 This is a solitary wasp species belonging to the family Sphecidae. The females of this species construct their nest with mud, hence this wasp and all other species of this genus are commonly known as mud dauber. Sceliphron spirifex is strongly associated with buildings and other anthropogenic structures, constructing its nests on windows, inside houses or any other safe places. However, like other solitary wasps, mud daubers are not aggressive to humans unless threatened. Furthermore, S. spirifex has a large range of distribution that comprises different habitats across Europe (the northern limit is Belgium), Africa and Mediterranean.

Females of S.spirifex are between 22-29 mm, while males are 15-25 mm long. Their slender body is black (including the antennae) with yellow parts on the legs and on the petiole. The petiole or waist is long and yellow and the wings are clear. The complete black thorax is a distinctive feature of this species among all the species of the genus.

Nests of a mud dauber are built up by females and consist of a series of tube like celled mud nest (up to 40 cells) attached to cliffs, rocks, tree trunks, bridges and buildings. The cells are mass-provisioned with several spiders (there may include different spider species) and sealed with mud. Each brood cell may contain up to 27 spiders as feeding resource of the single egg during its metamorphosis. The wasp egg is laid into the abdomen of the first provisioned spider. Interestingly, the amount of food a larva of S.spirifex receives is correlated with its size when adult. For example, female larvae receive an estimated 49% of more prey mass than male larvae, in the brood cell. The most common prey for their offspring are Orb web spiders and the nest provisioning may take just one day, requiring several trips for carrying preys and mud. One curious nesting behavior aspect of this wasp is that females do not mix the mud collected for the nest construction with saliva or any other organic fluids, as other Sceliphron species do.

Sceliphron spirifex is a generalist predator, hunting a wide range of spiders that live in several different habitat types. Thereby, on one hand S.spirifex is regarded as beneficial insect due to their control of spider populations. But on the other hand, spiders themselves are also considered to be beneficial arthropods in controlling pest insects, such mosquitos and flies. Thus a reduction of the local spider populations may signify a decrease of natural pest control in this area.

As normally occur in nature, the nests of mud daubers are often attacked by parasites, which are especially wasps of the family Chrysididae, commonly known as cuckoo wasps or emerald wasps. This parasite enters in the nest while the female host is foraging, and lays its eggs into the host brood cell, where their larvae consume the host egg or larva. Later the young larva of the cuckoo wasp feeds on the food provided by the host. Besides, some species of Diptera and Ichneumonidae were also reported attacking nests of this mud dauber species.