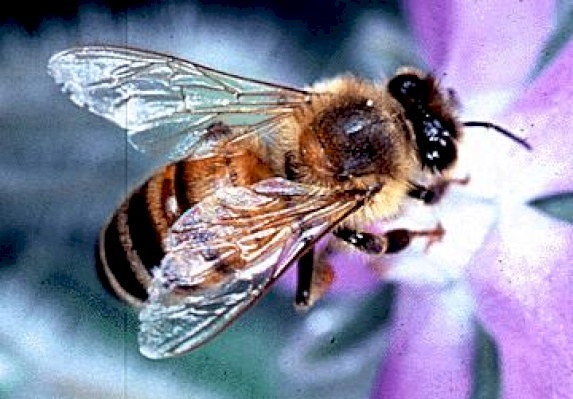 This is a social bee species, a race (subspecies) of the common honey bee Apis mellifera. Apis mellifera ligustica is originally from Italy, hence commonly known as Italian bee or Italian honey bee. It is widely distributed in the Mediterranean and commonly found in Palestine. However, this bee was slowly introduced also to northern Europe, North America, Australia and New Zeeland along the history. This species is the most widely distributed of the honey bees and is the most commercial produced race, due to its high honey productivity and its gentle nature. Therefore, A. mellifera ligustica is the favourite honey bee subspecies of the beekeepers. The Italian bee is well adapted to subtropical and temperate climates, but it is less successful in humid tropical regions.

In general A. mellifera races are physically similar to each other, which make it difficult to distinguish them. However, A. mellifera ligustica has bright yellow strips on the abdomen, has smaller body size, shorter hairs and has longer tongue length (6,3 to 6,6 mm) than the darker honey bee races (5,7 to 6,4 mm). Among different strains of Italian bees, their colour slightly differs in three ways: Leather-color; bright yellow (golden) and very pale yellow (Cordovan).

As a true social bee species, the Italian bee nest is a large colony (hive), with one queen and all the other individuals are sterile female workers. The few existing males (drones) will mate with the new queens during the swarming. After hatching, the new queen will swarm and mate with several drones (up to 15) along the flight, then the fertilized queen will start a new nest. An Italian bee hive can be really big, containing 90 000 to 150 000 individuals. The queen is the only fertile individual of the nest and is the mother of the entire colony population. A. mellifera ligustica shows lower tendency of swarming than other honey bee races. Interestingly, this bee species is an excellent forager, but they have a low sense of spatial orientation, causing the loss of the hive entrance on their way back to the colony.

In highly cooperative insect society such as honey bees, the entire honey bee hive is under the command of one queen. Nevertheless, for A. mellifera ligustica happens that conflicts within a colony emerge when more than one queen hatch. That may occur during the colony reproduction time when newly produced queens fight each other until only one queen remains in the nest. A recent study showed that young queens patrol queen cells to kill rival queens while they are vulnerable. Furthermore, workers may be aggressive to queens to prevent them from destroying other queen cells, as well as queens can make noises to inhibit worker aggression. In addition, workers may immobilize queens to make them easy targets for a rival; and queens can eject hind-gut contents to make their rival to be immobilized by the workers. Yet, the exact pheromone communication for commanding these behaviours is not yet clear.

One interesting particularity of A. mellifera ligustica is their cleanness and, therefore, they seem to be less susceptible to Acarine parasites. Especially the leather-coloured Italian bee strain showed high resistance to Acarine. The main parasites of this bee race are varroa mite, tracheal mites and bacterial diseases.