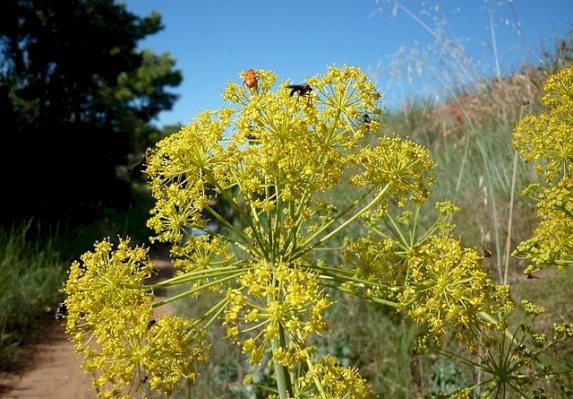 The common giant fennel is a tall, perennial herbaceous plant in the carrot family (Apiaceae). The plant bears a basal rosette of large, finely divided leaves, which emerge in early winter, followed by a tall, erect stem, that reaches its full height (up to 2 meters) and blooms in spring (March-May). The inflorescences are large umbels of small and unshowy yellow flowers, lacking petals. The flowers secrete viscous nectar that attracts many short-tongued insects, such as flies, wasps, beetles and very small bees. The pollinated flowers develop into flat, oval seeds that are dispersed by the wind. The aboveground part of the plant eventually dies out in summer, but the dry, hollowed out stem may remain erect for many months. These dry stems are used as shelters by diverse insects, especially the blue carpenter bee, Xylocopa iris, which builds her nest in them.

The giant fennel grows throughout the Mediterranean Basin. It is toxic to livestock and therefore flourishes in grazed landscapes. In Palestine, it grows throughout the country except in the Dead Sea Valley, and is more common in Jerusalem Mountains and Wadi Bathan (north) areas.

Although most parts of the plant are toxic to humans, an edible, well-tasting mushroom, Pleurotus еryngii, often grows on the plant's roots, and is traditionally picked and used in various dishes.

Besides Ferula communis, three additional species of giant fennel (genus Ferula) occur in Palestine, but are much rarer and occupy different habitats.