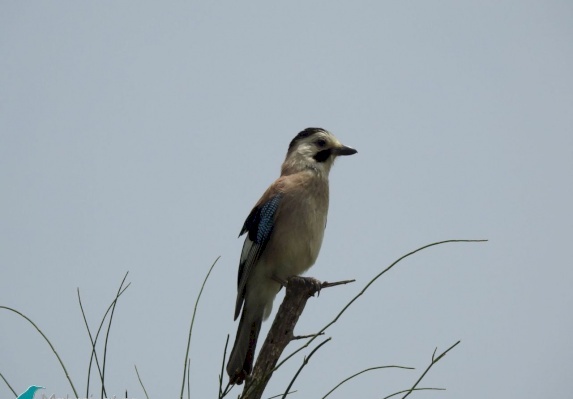 The Eurasian Jay belongs to the Corvidae family in the Passerine order. It is 32-35 cm in size, 170 grams in weight and with a wingspan of 54-58 cm. The Eurasian Jay is songbird and that’s a fact that surprises many due to its big size and unpleasant calls, but still the Jay can sing and imitate in an outstaying way a great variety of different bird calls. In urban areas the Jay can even imitate phone rings, cat meowing, car alarm, baby's cry and more. The Eurasian Jay is smaller than a pigeon, its generally beige colored but the cap, the beak, the mustache stripe and the tail are black. During flight white spots on rump and wings are visible, and on the wing-covers there is a unique black and pale blue striping pattern.

The Eurasian Jay is originally a European species and there for it favors habitats which are full of trees which can be both natural areas and also human inhabited areas. Its diet is composed of a great variety of seeds and fruits and therefore it is wide spread across the globe (in 3 different continents). The Jay is also known to steal and feed on bird eggs and chicks and it's quite common to find it during the breeding season surrounded by screaming birds that alarm all the others of its location. The meaning of its Latin name - Garrulus glandarius is the acorn loving chatter. Many times the Jays can be seen hiding seeds such as acorns as preparation towards the winter. The jay has a phenomenal memory and researchers found that one individual can remember thousands of different hiding places. In times of hunger the Jay will return to look for its hidden food. The hiding places that the Jay has forgotten will be revealed months later when the seeds will sprout. The first year in the Jay's life is crucial and most of the juveniles won't survive, but those who will, can live a long life. The oldest Eurasian Jay that was documented (by ringing) was 17 years and 11 months old.

The distribution of the Eurasian jay is widespread across Europe, Asia, North Africa and the Middle East and in this vast distribution 33 different subspecies can be found. The Eurasian Jays are not migratory in most of their distribution, but in northern areas of Europe most of them go south during the cold months of winter in search of food.

The Eurasian Jay is not considered to be under threat but there are some subspecies that the size of their population is unknown and therefore there is a concern that they are declining (in Algeria for example). In the past 100 years the Eurasian Jay population has grown due to their adaptation to human surrounding (especially in Britain, Russia and Palestine).