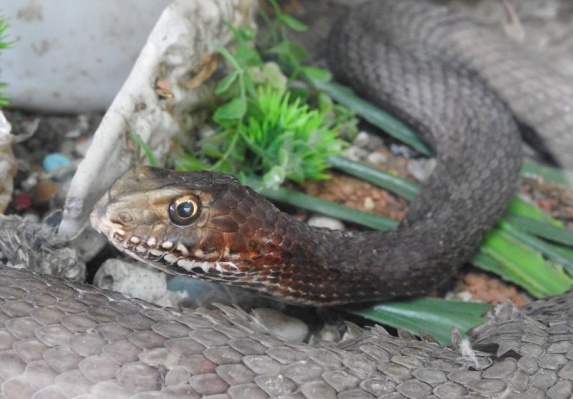 The Montpellier snake belongs to the Lamprophiidae family in the Squamata order (suborder Ophidia). A diurnal back-fanged (semi-venomous) snake, one of two species belonging to the Lamprophiidae family that are present in Palestine. Adult length can reach 2.08 m (body + tail). The Montpellier snake is very agile. In adults, the color of the back is solid, either brown, brown-reddish or brown-grayish. The belly is light. The upper lip scales are usually white with dark margins. The body scales are grooved. The head scales are larger than the body scales. The eyes are relatively large with protruding scales above them. The young are brown or brown-grayish and are scattered with brown or brown-grayish dots. White spots are adjacent to some of the dark dots.  Mating season is between April and June. The female lays 4-18 eggs in clutches during July and August, which hatch two months later. It feeds on rodents, birds and reptiles. It has the capability of swallowing relatively large prey. In foraging it lifts its head to improve its vision. It catches the prey, bites it and after several minutes starts swallowing it. The venom of this snake is not life threatening to humans. When encountered with man it usually tries to escape and when it fails it threatens by exhaling. It inhibits parts of northern Africa, the Middle East, parts of southern and eastern Europe, parts of Asia including the southern part of Russia.

In Palestine: it can be found in Mediterranean and semi-arid habitats.