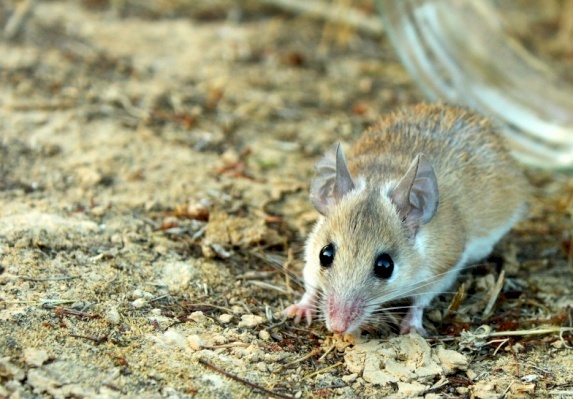 The eastern spiny mouse belongs to the muridae family in rodentia order. It is a very abundant mouse, commonly recognized by its sand brown color and spiky hair on the back together with a very distinctive white "tear" under the eyes. The main difference from its close relative, the golden spiny mouse, is that the spiky hair does not go past the ears to the front, while the golden spiny mouse has this type of hair also in the front. There's also an ecological difference- wherever both of them live in the same place, the golden spiny mouse will be active during the day and the eastern spiny mouse will be nocturnal. It was, up until not too long ago, considered to be the same as the Cairo spiny mouse but now they are two different species- one is found in Africa only (Cairo spiny mouse)and one all around the middle east (eastern spiny mouse).
The eastern spiny mouse is nocturnal and is an omnivore (eats both animals and plants), specializes in eating hard-shell snails. It can often be found by the big pile of white empty snail shells it leaves on a rock-shelf or under a bush. An interesting mechanism, perhaps used for defense, is the ability to lose the skin tissue that connects the tail to the body and by that, lose the tail. As opposing to some lizards that do that, the spiny mouse cannot grow back the tail and will remain with no tail for the rest of its life. The eastern spiny mouse is abundant all around the middle-east from Sinai Peninsula and Arabia in the south to Syria and Lebanon in the north and south Pakistan and Iran in the east. It can be found both in the Mediterranean and the desert habitats in rocky landscapes. It is less common to find it near human presence although it is not obligatory.