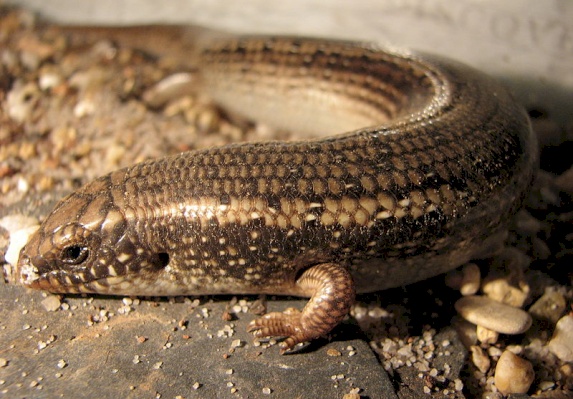 Picture resource: By HTO (Own work (own photo)) [Public domain], via Wikimedia Commons

The eyed cylindrical skink belongs to the Scincidae family in the Squamata order (suborder Sauria). The most common skink in Palestine. The adult length is up to 23 cm (body + tail). The eyed cylindrical skink has a thick body, relatively short limbs and a thick detachable tail. The scales on the head are larger than those on the back. Its color is copper-like and in most populations it is covered with light spots on a dark background that looks like eyes, hence its name. In some populations there are less spots and some even lack the pattern at all. During June and July the female gives birth to 3-10 live young whose length is 8-9 cm. The live young resemble the adults. Diet includes arthropods including scorpions and centipedes and sometimes even fruit. The eyed cylindrical skink is mostly diurnal. In extreme arid habitats it is also active after sundown. Whenever it is not active, it hides under rocks or under the ground, sometimes in burrows. It is found in all kinds of landscape including sand dunes and especially in stony habitats. It inhibits southern Europe, parts of the Middle East, Africa and Asia.

In Palestine: It is common in most Mediterranean and semi-arid habitats.