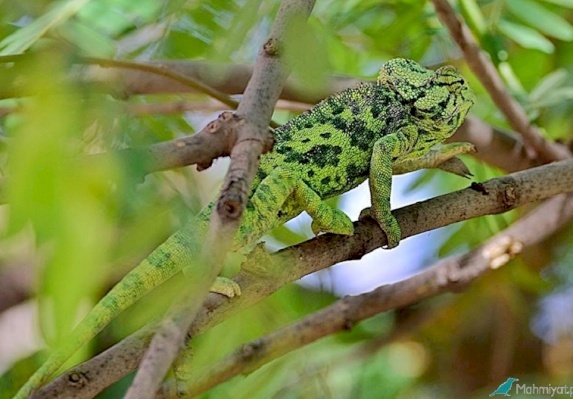 The Mediterranean chameleon belongs to the chamaeleonidae family in the Squamata order (suborder Sauria). This one is the only species of the chamaeleonidae family present in Palestine. The adult length is up to 30 cm (body + tail) and the male is larger than the female. The Chameleon is known for its camouflage capability. It has a vertically flattened body a unique head: on the top there is a rigid prominent ridge, the eyes are protruding above the head and each eye can move independently. The Chameleon has a variety of colors, the most common of which are green, gray, yellow and brown. The colors can change rapidly depending on its mood and the environment. The Chameleon has a special structure of toes that help her in grasping branches. The toes are divided into two groups, which make them resemble opposing claws. The Chameleon’s has a prehensile undetachable tail that maintains balance and stability. The mating occurs during August-September. In October the female lays up to 40 eggs in a niche and the next generation hatches during the summer of the following year. The chameleon has a long sticky tongue, which serves for hunting. At the proper distance from its prey it shoots out quickly and catches the prey. The diet consists of small vertebrates and arthropods. The adults sometimes prey also on lizards and even small fruit. The chameleon inhibits parts of the Middle East, southern Europe and northern Africa. It is diurnal and mostly found on trees and shrubs.

In Palestine: common in most Mediterranean habitats.