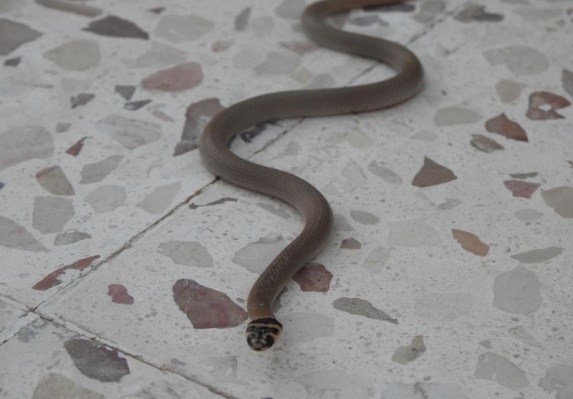 Roth's Dwarf Racer belongs to the Colubridae family in the Ophidia (snakes) sub-order of the order Squamata (scaled reptiles). It is one of four snake species of the genus Eirenis present in Palestine, all of them non-venomous. They are also known as Dwarf Snakes, or Peace Snakes, the latter name due to the fact that they are tranquil and seldom bite. Roth's Dwarf Racer reaches a maximum total length (body + tail) of 42 cm, usually less than this length. The markings on the head and neck of Roth's Dwarf Racer are typically shiny black patches bordered by yellowish or cream colored bands. These markings differ among individuals, and may be useful for researchers for identification of individual snakes during studies. They are active during daytime (diurnal). They are oviparous (they hatch from eggs), hatchlings usually appear in late summer or early autumn. The diet of Roth's Dwarf Racer consists of small invertebrates, including venomous arthropods such as: scorpions, centipedes and spiders; also most probably lizards. Thus, they should be considered beneficial to man. Roth's Dwarf Racer inhabits parts of the Middle East.

In Palestine – Common in most Mediterranean habitats, sometimes also in semi-arid ("semi-desert") habitats.